First day of cycling in Laos. A beast. over 1000m climbing. 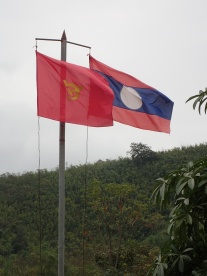 Laos flag. And communist flag. Which Laos sort of is.

First corner in Laos. Oops. Only happened yesterday, but rather common apparently. Shocking.

Local girls, dressing up for the boys, as they do all over the world. 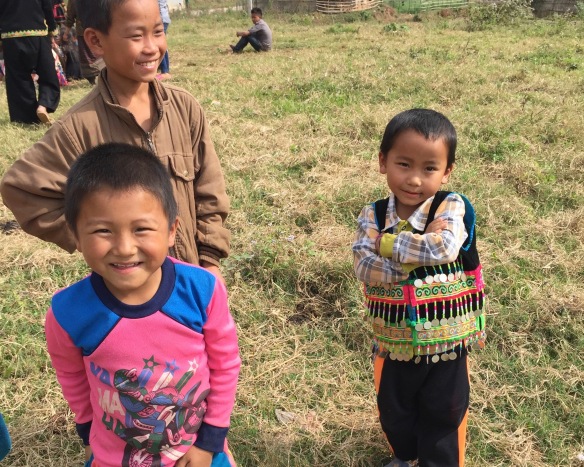 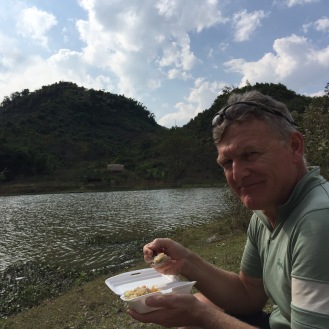 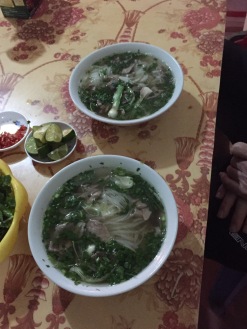 The first of the UXO, unexploded ordinance, all over the country.

Early breakfast of noodle soup with the government workers before transferring over the border crossing into Laos.  Goodbye Zan, hello Loun.  Visa was expensive at $45 each, but, three different guards looked approvingly at our passports and let us through.  Linda desperate for coffee but, no.  On to bikes and welcome to the Laos roads.  Dusty, gravelly and pot-holed they are.  Loun, helpfully, showed us the climbs for the day on paper, rather harder than cycled so far in Vietnam.

Around the first bend we were shocked to see a huge lorry had fallen over the edge of the narrow road.  Swiftly followed by two dead chickens on the road and a kamakazee cockerel under Paul’s wheels.  Paul was ok but we’re not sure about the cockerel.  The downhills are great but last a tenth of the time of the uphills, sadly.  Temperature is already 8 degrees warmer than in Vietnam and by lunch the sun broke through.  The world is a different place with sunshine.  We cycled through rural villages, lots of really friendly children shouting sabaidee and hello.  These are new words for us to learn now having just mastered Cam on and Xin Chao.  All very confusing for us non-linguists.

Before our guest house in Vieng Xai, a final kick in the legs, a nasty hill.  However, a hot shower and life is much better.  The shower was in a wet room ie the toilet bowl leaks onto the floor when flushed and the shower doesn’t drain anywhere, anyway.  We were met by Loun for supper up the road, sticky rice and beef salad.  The art is to roll a smallish ball of rice between your fingers and then mush the beef into it.  Very filling and helpfully washed down with Lao beer at £1 for a large bottle, and jolly good.  As yet, we have no kip, which is the Laos currency, so rather sheepishly have to borrow money off our guide.  He charges one beer, happy to pay.