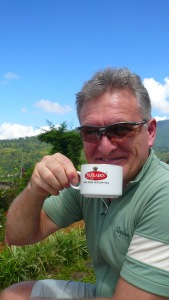 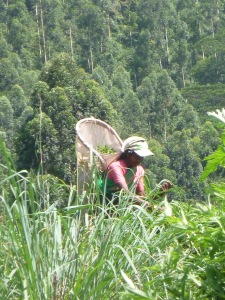 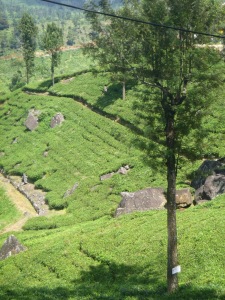 Tea plantation in the Hill Country

Even Paul succumbed to taste some green tea (with a piece of chocolate cake).  He still doesn’t like tea.

These hillsides were untouched until the 17th century as the ruling kings forbade any settlements.   After slash and burn policy, Lipton and Co. with others turned up and introduced tea after the coffee plants failed due to disease.

The Tamils from southern India were brought down to Sri Lanka as the labour force to harvest the tea crop.  Initially, they were treated little better than slaves.  More recently conditions have improved for them and the tea plantation owners have started to  provide better education and welfare.

Every single child we have seen has been really friendly and interested.  One even gave Paul a push up a steep part of the hill. Most just want to practice their English.  In school they are taught 3 languages; Tamil, Sengalese and English.

A hot climb  1426m into the Hill Country with lots of switchbacks and unmade roads.  36c at the start and 15c at the end in Nuwara Eliya

4 thoughts on “To Nuwara Eliya from Hatton”