Through the Jungle at 5am. 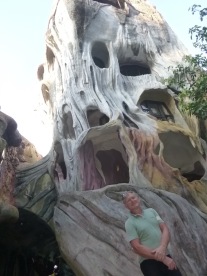 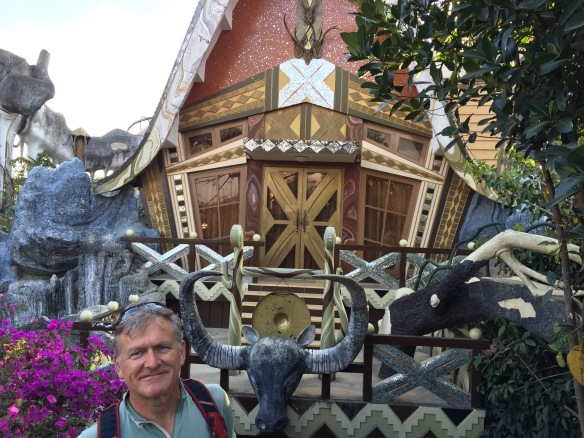 Crept out of our lodge at 5:00 am, although the croaking frogs would have drowned any noise we made.  It’s rather exciting cycling through the jungle in the dark following a pot-holed sandy trail towards the crocodile lake, as instructed by our guide last night.  Difficult to hear the subtle sounds of the jungle above the rattling of the bikes and the mutterings of Linda’s “oh bugger” as she juddered over the rocky trail.  After 8km or so, just as the sky began to lighten with the dawn we stopped to listen.  All kinds of whoops and shriekings.  We were anticipating seeing a colony of gibbons swinging through the trees.  Paul did see a rustling in one tree and a gibbon tail.  It was good just to stop and listen without anyone else around as the jungle woke up.

Raced back for early breakfast to be in time to meet our guide for 7:30 am.  We discovered that the whooping which we imitated back to our lodge guide was indeed the sound of the gibbons.  Hoorah, may not have seen them but certainly heard them.

After one of our best breakfasts so far, with proper coffee, off to Da Lat, garden city of Vietnam so-named because of its mild climate. Pedal through the jungle, again, but this time easier as we can actually see where we are going. Also fun as we can see big trees, including one named after the ex-prime minister of Vietnam, and over 700 years old. Quite extraordinary that it hasn’t been cut down and made into 1,000’s of armchairs.

Da Lat has an elevated position in the Southern Highlands where the economy thrives on growing vegetables and flowers.  A landscape of pine forests and distinctly cool air as the sun went down.  A quick visit to the Crazy House, a series of “Gaudi on acid” concrete buildings meant to give the Vietnamese an appreciation of the natural world around them which is being destroyed.  Not convinced they get it.  It’s very popular with honeymooners who like to stay in one of the number of bedrooms for rent within the weird, bizarre structures.  I think we just don’t get the Vietnamese.