It’s wetter than it looks. 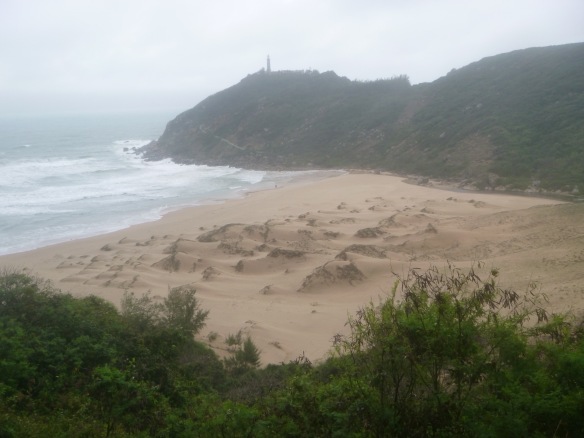 It’s still wetter than it looks. 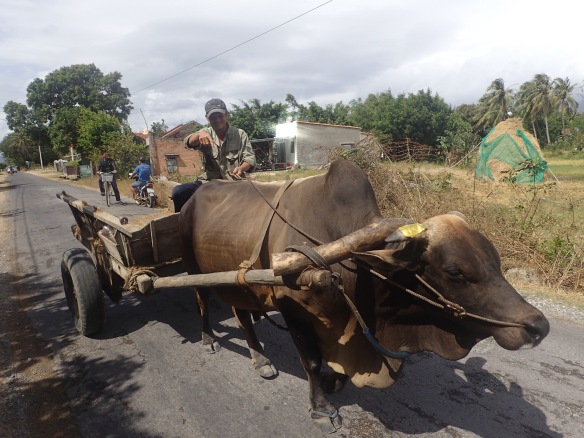 The predicted storm is officially here.  Up early to a grey day, raining and blowing a gale.  Really don’t fancy hanging around the hotel for another day, so waterproofs on and pedal off.  Did almost forget the passports being held at the front desk.  Whoops.

A cyclist we had met in Saigon had recounted his story of flying down from Hanoi to Saigon on his road bike doing 200kms per day.  This is possible because the prevailing wind is north to south.  As we discovered.  Add a storm, lashing rain and some hills and the effort was huge to do a measly 115 kms north to our “Scandia resort” hotel.

The weather was relentless for the 9 hours of our trip.  We had a break for a pretty nice lunch en route.  The usual fried rice and a couple of beers.  Just good to get out of the wind for 40 mins.

If we had known we wouldn’t get to our hotel until 6:30pm in the dark, we may have been tempted to throw in the towel earlier, and book a proper hotel.  What we didn’t know was that the hotel was 4kms north of town up an unfinished road which was now muddy and puddled.  With no directions and no signage, not quite sure how we ever found it.  But, the reviews had been tempting.  It was deserted.  We stumbled upon the open-air reception desk which was dark save for a television turned on.  We were both exhausted and the thought of having to trace our steps back to town was a tough one.  As we were about to pedal off again, a local lady arrived, speaking very good English.  She thought we weren’t coming as it was so late – 6:30?  And, the killer, it’s too late for dinner!  But, she did have cold beers and yes, we could get breakfast there, not included in the price.  She relented regarding dinner and offered up the worst Pho bo (beef noodle soup) and fried rice that we have tasted.  The beef tasted of mothballs.  It must have been bad as, despite being ravenous, Linda didn’t eat it all.

The five beers softened us a bit so we made the best of the place and climbed into the sandy sheets.  Yuck. Not cheap enough,  A review definitely going on Trip Advisor.